We thank Kevin Hellman of SDS Events for producing our terrific musical lineup year after year! 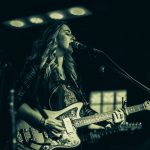 Evan Diamond – With a powerful, soulful voice and a three-octave range, Evan Diamond is a two-headed titan of live music, playing 20+ live acoustic solo show a month as well as doing regular plugged-in gigs with her full band, Evan Diamond & The Library.

Evan has garnered a lot of attention for her live performances and music which use live looped guitar, drums and vocals to create an eclectic blend of pop, rock and r&b. She has a unique talent total popular cover songs and put her own spin on them to make them completely her own.

Evan’s, music has proudly been featured on 91x, San Diego’s top Indie radio station, TV’s KUSI News, the Indie Spoonful blog, she recently opened for Broadway star, Megan Hilty at the San Diego symphony’s Bayside Summer Nights concert Series and she has been nominated for Best Singer-Songwriter at the 2019 San Diego Music Awards. Evan and her band have also showcased at San Diego’s House of Blues, Hard Rock Hotel, the Viper Room and the Hotel Cafe.

With her debut EP “Intersections” out now, Evan Diamond is more passionate than ever about inspiring her audience and having her music and lyrics resonate with a new generation of listeners. 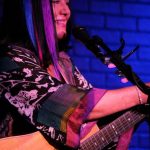 Donna Larsen & Messengers – Donna Larsen is a Billboard Award-winning songwriter, and Executive Producer for San Diego Indie Acoustic Original Artist Showcases. This songbird’s sensitive melodies, thought provoking lyrics and highly original “PopCoustic” music will fill your heart and resonate in your soul. She thrives on writing and performing music that is positive and spiritually alive, and joyfully shares it. Donna cherishes her experiences of performing in North America from Alaska to Oaxaca, Mexico, and in Europe from Prague to Budapest and Vienna. The richness of these varied cultures has contributed to her music becoming more insightful and spiritually centered.

This prolific songwriter is currently in Noisy Cricket Recording Studio producing the CD for “In My Own Backyard”, her original Children’s Picture Songbook. This beautifully illustrated Picture Sing-Along Songbook/CD Set offers up heartwarming and imaginative songs about all that is real and imagined in a child’s backyard. Characters come to life through her music, written to take you and any child into a wonderful fantasy world filled with faeries, dragons, unicorns and more! 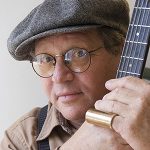 Robin Henkel – Blues guitarist and two-time winner of “Best Blues CD” at the San Diego Music Awards, Robin Henkel performs slide guitar and country blues with an intensity rarely seen in Southern California. Drawing from the music and the styles of Robert Johnson, Fred McDowell and Elmore James, Robin has molded his own intense and entertaining personal style. Don’t miss this for anything! 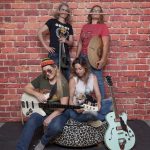 After months of cancelled concerts and unemployment checks, the women of Whitherward decided they needed to make something of this unwanted found time. So Ashley invited Phoenix based Stephanie to her San Diego home, and the pair drove to Laura Hall’s studio in Los Angeles to record four of their favorite songs and a couple of bonus tracks. With masks on, the trio recorded as many weird instruments as they could, anything was up for discussion except for bass and drums. The idea was to keep it acoustic plus. And keep you guessing as to what exactly you’re hearing. So, what exactly are you hearing? Stephanie Groot on acoustic and electric violin, often with a wah pedal, and mandolin. Laura Hall on the trio’s favorite unique keyboard sounds, bass melodica and accordion. Ashley E Norton on acoustic and electric guitar and percussion. 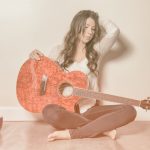 Jessie Lark – Armed with a commanding voice and a soulful style, Jessie Lark candidly explores love, loss, and life through the universal language of songwriting. She began performing as a child in her hometown of San Diego, honing her skills and performing the National Anthem for professional sports teams before she was old enough to enter most local venues. In 2018, she released an acoustic EP (After Hours) that was praised by reviewers, including being awarded San Diego Citybeat’s prestigious EXTRASPECIALGOOD nod.

Jessie has been nominated for Best Singer/Songwriter at the San Diego Music Awards, and was endorsed by Logitech Ultimate Ears, the top in-ear monitors for musicians. She has opened for artists including Big Bad Voodoo Daddy, Blake Lewis, and Rick Springfield.

She will be joined onstage by her husband who writes music and plays guitar. They developed their duo set during quarantine, performing weekly livestream shows, many of which featured other local musicians as guest artists, including Evan Diamond and Lindsey White who are also on the ArtWalk bill this year. Those livestream shows can be found on her Youtube. 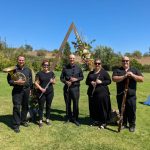 Left Coast Quintet – More than just a musical ensemble, The LCQ is a close knit group of musicians and friends who share a passion and joy for performing fun, interesting, and unique musical selections. We have put together a custom library of music that includes everything from Debussy to Disney, the Beatles to Bach, and so much more.
Live music at events can be anything from our ensemble providing background music while guests mingle, to having a fanfare performed while you’re walking down the aisle. The Left Coast Quintet has performed all over San Diego, and we are just as comfortable at beautiful country clubs as we are beachside, or in a winery, or at a private home.
The benefits of having a live ensemble? Mainly the feeling and the presence at the gathering – live music warms up the color and atmosphere of the room! Music doesn’t just come out of a speaker or search engine, you get to experience live artists working together to make something really special. When guests walk through the door and hear us performing, they are transported into the total experience. The memory of great music stays with you for a long time, it’s a classy thing to have, and the memories for your guests will be priceless. 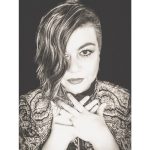 Lauren Leigh – For the last seven years, Lauren Leigh has made a name for herself as a singer, songwriter, bandleader, session singer and hired gun based in San Diego, CA.

Before the four horsemen of the apocalypse brought their wrath to 2020, Lauren recorded and released a 5 song EP entitled Flare at the beginning of 2020. In 2021, Lauren plans to release a series of singles inspired by love lost in the quicksand of the pandemic. She fronts Lauren Leigh and the Low Keys (soul, funk, R&B, pop), and Wild Heart (classic country), and performs frequently in duo format with local guitar legends, Sam Hunt, Ben Zinn and Joshua Taylor. 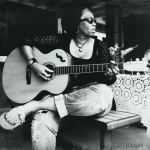 Lisa Sanders – Lisa Sanders is an electrifying harmonizer. Her heartfelt songs are genuine with deep meaning and conviction. A musical style that can only be described as a soulful country blues, her genres include folk pop, gospel, rock and jazz. Writing, singing and producing from her heart in nearly every genre for over three decades, Sanders continues to make an impact in the musical world.

Born in Philadelphia, Pennsylvania, she began singing with her older brother Ty at an early age. The family relocated to Argentia Newfoundland, Canada where her parents encouraged music daily. Artists from Motown Records, Johnny Cash and others with a mixture of rock and classical music were key influencers in Sanders’ upbringing. Upon moving to Southern California, she signed to Cargo Earth Records and released her first album Isn’t Life Fine. After her second album Life Takes You Flying was released in 1999, Sanders went on to establish her own label Maya Jade Records in 2004. She has since released five albums from her own label.

Sanders has worked with musical legends including the Truckee Brothers, Lucinda Williams, Bonnie Rait, Al Green, BB King and Babyface. Sanders continues to song-write, produce and collaborate with artists from all over. She currently resides in San Diego as the founder of Star Woodwork by Lisa. Star Woodwork by Lisa specializes in handcrafted wooden materials into beautiful objects, structures and garden pieces. 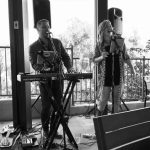 Story & Tune – At the heart of Story & Tune is the real-life love story of two artists from different corners of the world, who found their way to each other via Instagram and in spite of considerable odds. The result was a whole lot of joy. And a whole lot of songs.

Born and raised in an inner city suburb of Sydney, Australia, singer-songwriter Ben Grace’s three decade musical portfolio includes hundreds of original songs that range in genre from Americana to Pop Punk, from classical scores to earworm children’s television themes. Ben’s lifetime of experience as composer, lyricist, producer, and pianist provide Story & Tune with the ability to deliver radio-ready songs to our clients that they are incredibly proud to share.

Shamelessly Californian poet and writer Karyn Thurston began her career in words with an essay, 10 True Things About the First Year of Parenthood, which swept the globe in a viral wave of reassurance and parent-to-parent support. In the years that have followed, she’s partnered as lyricist with up-and-coming musicians and songwriting legends alike, blending her gift for poetry and spoken word with a team of artists she deeply respects and admires.

Ben and Karyn met for the first time weeks after they first said I love you, a blush-worthy whirlwind love story that landed them in a creative partnership writing a torrent of poignant original songs. Together now in their home studio in San Diego, CA, they share a passion for the timeless art of lyrical storytelling, the complex simplicity of a perfect melody, and a deep love for helping others tell their stories, share their secrets, profess love, mourn, mend, and heal. 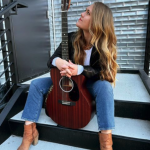 Jess Wright – Jess searches for the beauty in the brightest and dimmest moments of life, and is passionate about sharing the words that are sometimes hard to find. An Americana singer-songwriter, she draws from Jazz, Country, Rock, and Soul to create a sound that is both classic and new. She is influenced by storytellers such as Joni Mitchell and Leon Bridges; Jazz icons Ella Fitzgerald and Etta James; country legend Patsy Cline; as well as the Spinners, Sting, and Fleetwood Mac to name a few.

Jess was born in a small island town on the coast of Maine, raised on backroads and mixed CDs. She graduated from Vanderbilt University in 2018, where Music City (Nashville, TN) deepened her passion and curiosity for all things music – in particular, Jazz and songwriting. After college, she sought her next adventure in San Diego, CA.

Jess Wright got her start as a Jazz singer out of college at Mr, Peabody’s in Encinitas, CA singing with local legend Tony Ortega’s band. After months of growth and vocal exploration, she decided to dip her toes into the singer-songwriter music scene, with only two original songs and a cover in her back pocket. Within weeks, she was diving headfirst into San Diego North County’s vibrant community of original musical artists. Ever since then, she has been pushing the boundaries of what she knows: challenging herself in new venues, with new music, and performing with some of the best musicians she has ever had the pleasure of sharing the stage with. She believes music is shared, boundless, and deep, and loves the never-ending journey of discovery.